(all authors are first author)

Building on our team’s work with enhanced cross-over multi-modal expressivity through embodied interaction in opera and dance, we presented a participatory workshop at CARPA4. Following an overview of earlier work, the workshop included hands-on interaction with our new custom-built system OculiVocem. The workshop was followed by a discussion in order to inform the work that we presently undertake towards new premieres in 2016 and 2017, commissioned by the Croatian National Theatre in Rijeka, Musica Vitae in Växjö, Sweden and Berwaldhallen in Stockholm, Sweden.

During a long-standing collaborative work, our team has developed new artistic tools where technology offers means to e.g. let bodies sing [1] , dancing life into machines [3] and to let opera singers accompany themselves through bodily interaction [2]. On an overarching level, our work proposes that performing with artistic interactive systems offers insights into perceptions of new scenic subjects [4] and raises questions of what is human and non-human. We propose that artistic expressivity is re-constituted through virtuoso interaction with machines, a topic that also was discussed during our session at CARPA4.

Our workshop started with an overview of some of our previous technologies for vocal and bodily performance. We started with presenting The Virtual Viola da Gamba in which singers accompany themselves through bodily movement, transformed through flex-sensors to a synthesizer where a chord sequence is generated by movement. Video 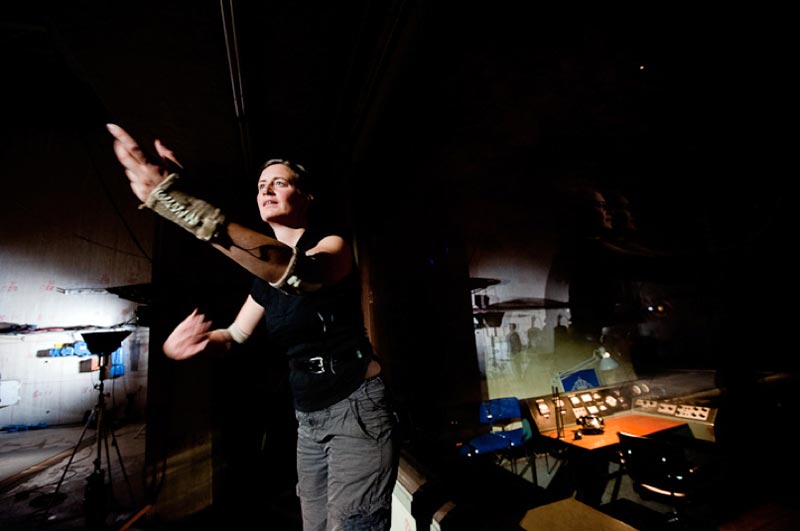 Secondly, we presented The Vocal Chorder, a device that allows performers to interactively accompany themselves through pushing, leaning on, and bending steel wires. Audience members can also use the instrument to interact with the operatic voice. When a person steps into the Vocal Chorder, its wires enable full-body interaction to explore the sounds and the interactive pyramid projected in front of the performer. It is a visualization of the child in Ray Bradbury’s short story “Tomorrow’s Child,” born in another dimension and perceivable by its parents only as a pyramid. Video 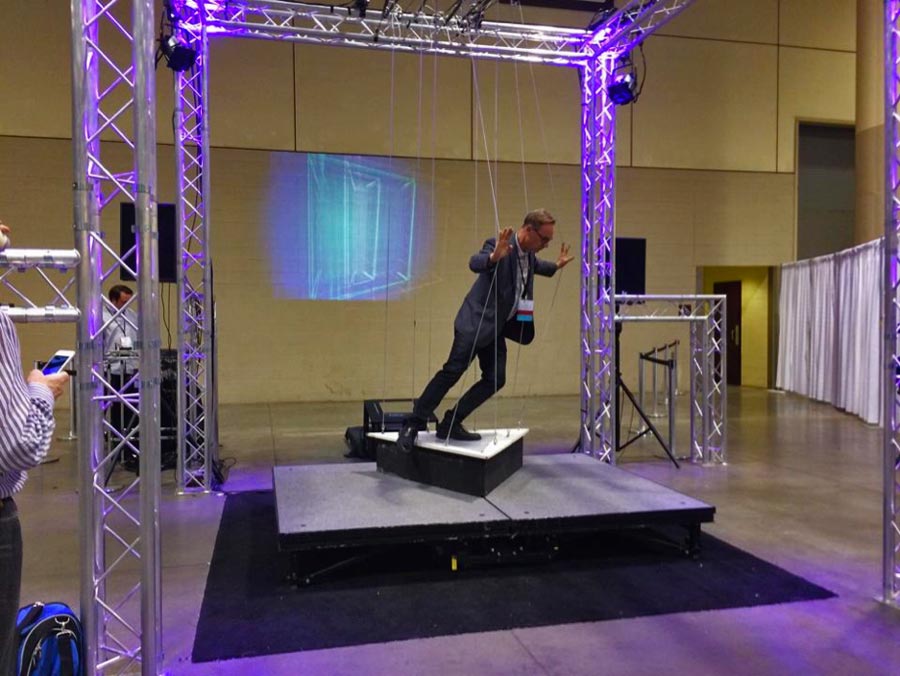 We then continued with presenting the Coloratura Machine in The Charged Room, that enables opera singers to manipulate the sound of their voices through movement in space. A video camera transforms the X- and Y-axis movement to information that informs the playback of vocal sounds according to position.

Figure 3: Alexandra Zetterström-Büchel interacting with her own voice in The Charged Room – also called “The Colorature Machine”.

Then followed a demonstration of a pilot version of OculiVocem, the new system that we are presently developing. At this point it consists of two “observers” – autonomous digital interactors. Each computer is equipped with a video-camera and software enabling them to communicate over Wi-fi to yet another computer that functions as a main component in the sounding result, merging signals together and producing sound. 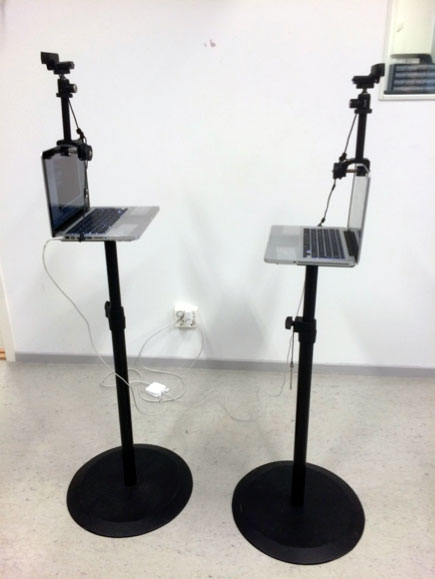 Our work with OculiVocem is inspired and informed by Maria Callas’(13) extreme vocal and bodily performances. In particular, her rendering of the role of “Medea” in the opera by Luigi Cherubini(14) from 1797 is in the foreground for our current work with OculiVocem. In order to explore Maria Callas’ vocal expressivity, her voice is re-rendered through one of the observers, whereas the orchestra is re-rendered through the other. Thereby, the interactor may perform her voice and orchestra through bodily interaction, exploring her voice through the body.

After the demonstration, we invited participants to try the OculiVocem. Several audience-members did so and then followed a discussion.

Topics that were raised during the discussion that will inform our future work were:
– How to define scenic subjects?
– How does the new work with OculiVocem relate to the topic of empowerment?
– How does bio-feedback change your performativity?
– How does the “spectre” of Maria Callas enter the equation?
– The topic of repeatability and “rehearsability” in relation to the new system?