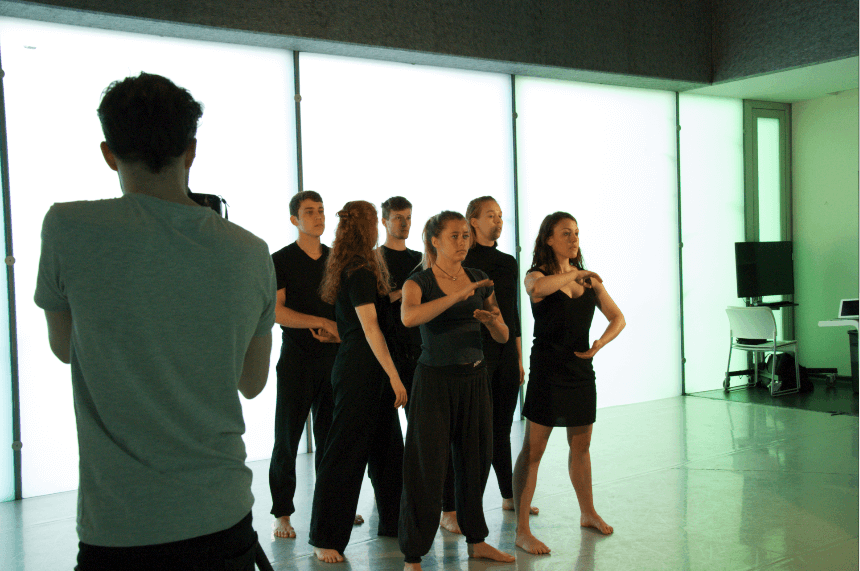 Taking Judith Butler’s concept of ‘performative acts and gender constitution’ to explain “the mundane way in which social agents constitute social reality through language, gesture and all manner of symbolic social sign”(Butler 1988, 519), this paper provides a model for understanding how social agents affect our making as artists.

More particularly, I try to answer the question, how do social barriers and modes of social temporality retrain our freedom of making? On the one hand, artists operate in a field of almost limitless possibility and permission; globalisation and digital technology seem to collapse the boundaries of time periods, space, styles and concepts, allowing total freedom. On the other hand, we all seem locked into an inescapable economic, political and ecological endgame.

With this conundrum in mind, this paper refers to the series of cross-disciplinary workshops titled Performativity and Image Formation that took place in collaboration with the Trinity Laban Conservatoire of Music and Dance (February–June 2016). Performativity and Image Formation was designed to analyse different elements that are involved in “social agents” in our everyday life, aiming to establish a new dimension of looking at registered images or news documentary scenes by exploring the artistic movement of the body in space and bodily gestures (hands, facial expressions) from photographs produced by news channels in conflict zones such as Aleppo. A two-channel video and series of performances was the outcome of collaboration with artist Jakob Rowlinson and dancers Alina Pappi, David Rodriguez, Massimo Monticelli, Stephanie D’Arcy Collins, Evie Oldham and Olivia Thynne. Some sample images are included in this paper. 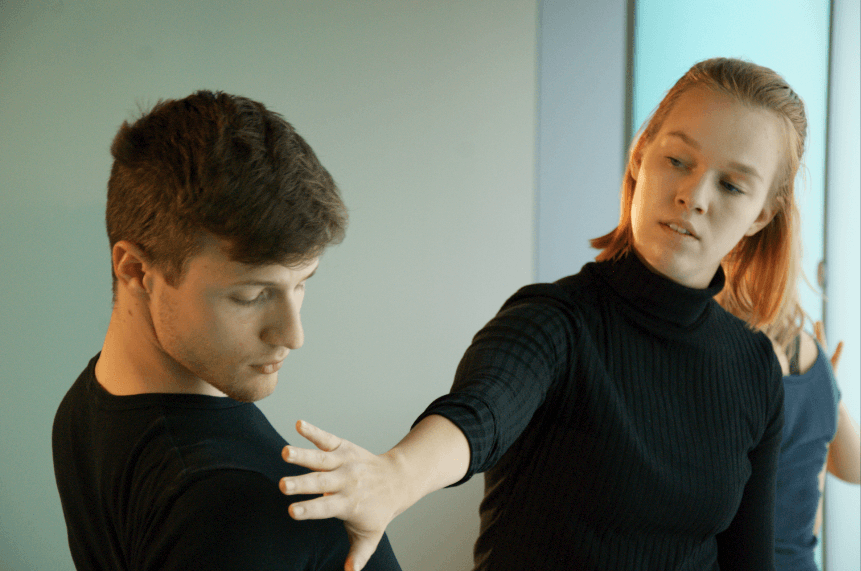 The personal is implicitly political in as much as it is conditioned by shared social structures, but the personal has also been immunised against political challenge to the extent that public/private distinctions endure. (Judith Butler)

It was my reading of Butler’s text that led to the series of experimental workshops which explored bodily gestures and their relation to the concept of public and private. Indeed, I discovered that what we commonly view as private behaviour is, in fact, an entirely public matter. It seems that the body can be seen as undergoing an “active process of embodying certain cultural and historical possibilities” (Butler 1988, 521), and thus a process of appropriation, in which a phenomenological theory of embodiment describes two simultaneous acts, firstly acts which constitute meaning and secondly acts through which meaning is enacted. In other words, there is no act or gesture which is singular; all acts are a repetition of a previous act which embeds, enacts or performs social meanings.

Maurice Merleau-Ponty (1962) notes that the body is a “historical idea” which gains its meaning through a concrete and historically-mediated expression in the world. Hence, there is an agency which is understood as the process of rendering such possibilities determinate. As an intentionally organised materiality, the body is always embodying possibilities, both conditioned and circumscribed by historical conventions. In other words, the body is a historical situation, as Simone de Beauvoir (1974, 38) has claimed, and is a means of doing, dramatizing, and reproducing a historical situation. From this, we can say that gestures are rarely, if ever, radically original. 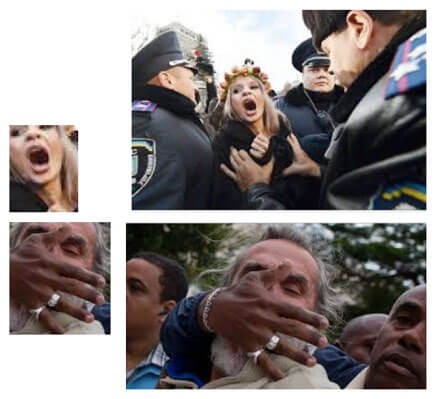 Following the lines of thinking above, I became interested in exploring existing images which capture moments of anger, protest or public demonstration. I started to take these images and experiment with them by cropping to remove the face, hands and/or body. I also separated the male ones from the female ones (Fig.3). As part of this process, I began a collaboration with Jakob Rowlinson at the Trinity Laban Centre. Together, we put together a series of case studies with accompanying performances to present my findings. The project developed in three sequences which are detailed below. 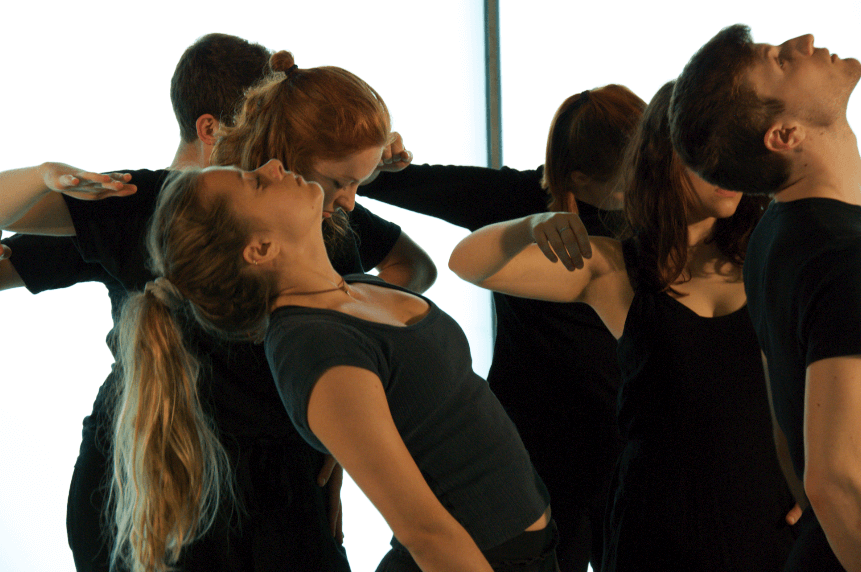 Here, the movement of the performers was dictated by a voice that instructed them what to do with their body, shoulders, hands, eyes, and so on, based on the gathered online images mentioned above.

To create a more coherent piece which could be aesthetically pleasing, I turned to choreographies with a similar theme for inspiration. I was particularly drawn to a dance piece by Pina Bausch titled La Prima Vez (La Prima Vez – Pina 2012). Based on Bausch’s performance, I created a simplified version of the choreography to provide a structure for my gathered gestures and movements. Fig.6 shows a series of hand drawings which were used for workshops. 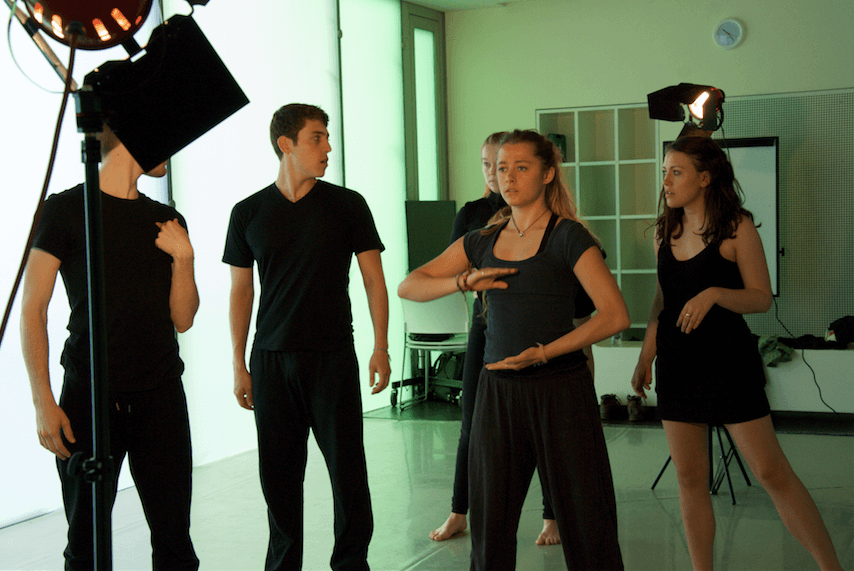 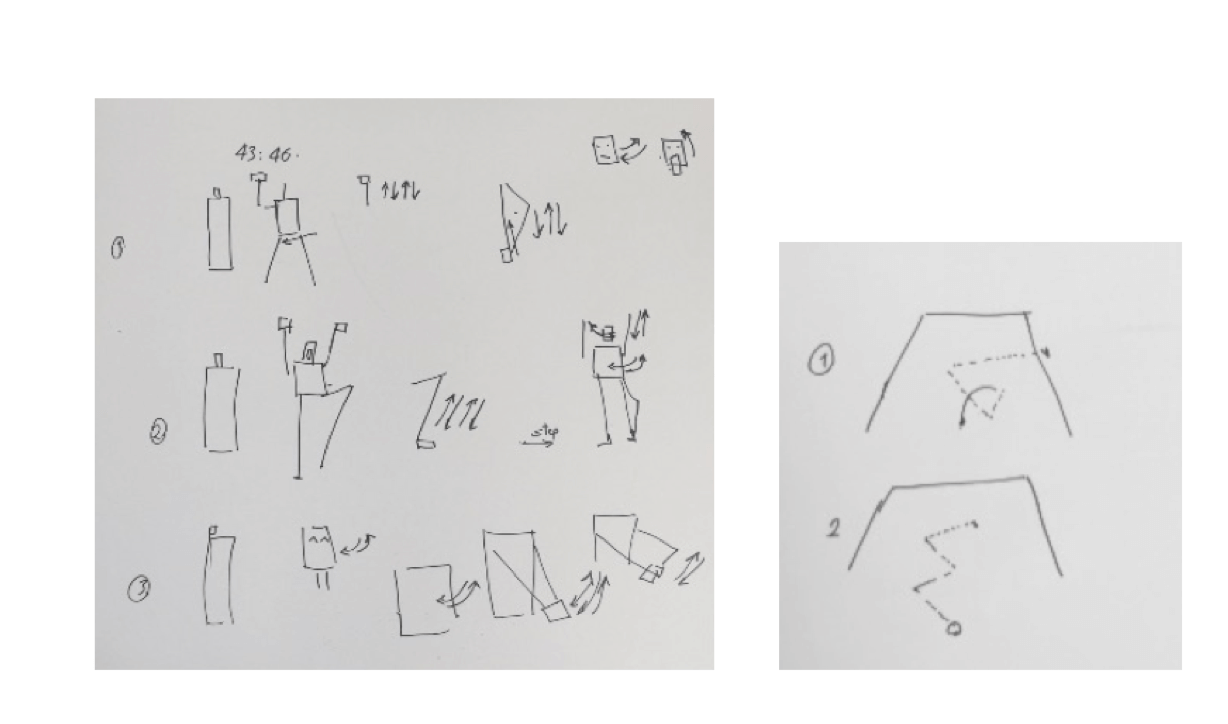 A performance piece emerged in response to a magnetic power where the female performer was instructed to react to the movement of her male partner in a magnetic fashion; for instance, when his hand touches her left shoulder, she should lift towards the left. In this way, the touching of the bodies creates a kind of stretch which violates the normal setting. The man has an almost magical role to play in this and should feel massive power in his hands. Some images and screen shots from the video that was taken at the workshop are shown below. 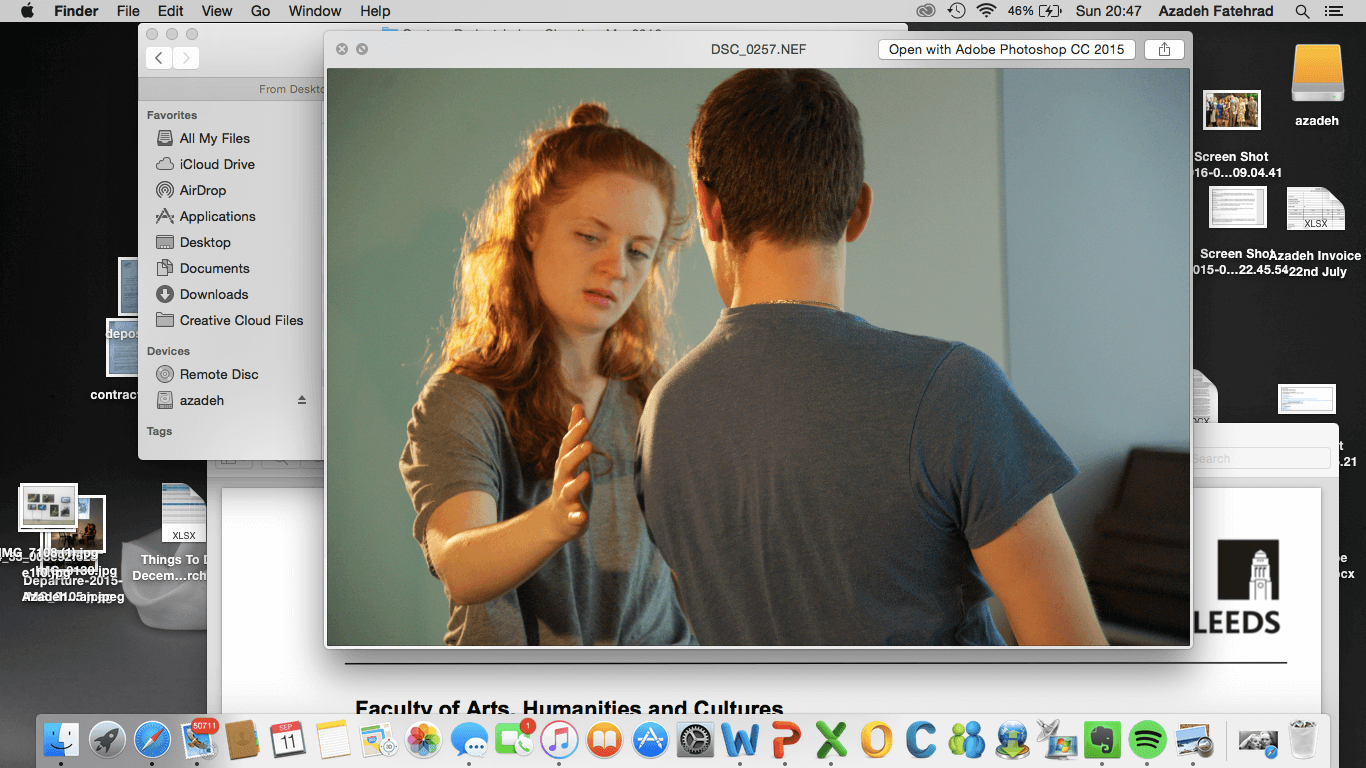 This section was a performance piece that was made to look like CCTV footage. The ‘script’ below was used to create the piece. It can be seen that the language used in the script creates some distance from the extreme violence that is actually happening. Rather than the script to a violent film, it reads as a script to a form of aesthetical movement that, whilst conveying the ideas of power, anger/aggression and defence, is rather different to how the piece ultimately appears on the CCTV footage. In this way, there is a new image created, different in form and context. Could repetitions, descriptions and recreations affect the meaning of gestures?

A: Moves slowly but in an exaggerated way. Steps forward – left foot, crossing over to the right side. Moves left arm across to the right side, raised level with the sternum. Leans forward, head first, right shoulder pulled backwards. Twisting motion. Right hand clenches into a fist. Then swings round – in a wide arch, right foot lifted up and almost falling forward.

B&C: Slowly walk side by side [towards the camera?], heads leading, hunched over almost, arms hanging by side. Slowly walk forward, deliberately placing one foot in front of the other. Legs straight. Then stop, bend knees and crouch forward even more.

B: Sudden lunge forward, large step with left leg. Shoots left arm forward and around. Momentum of punch spins you around into a crouching position.

D: Head turned to the side – arms away from the body (down and out). Then both hands held out, palms facing outwards. Expression: eyebrows raised, forehead creased.

C&D: C moves menacingly towards D, who begins backing away.

C: [Close up of] hand punching the air as if holding a weapon, short jabs. 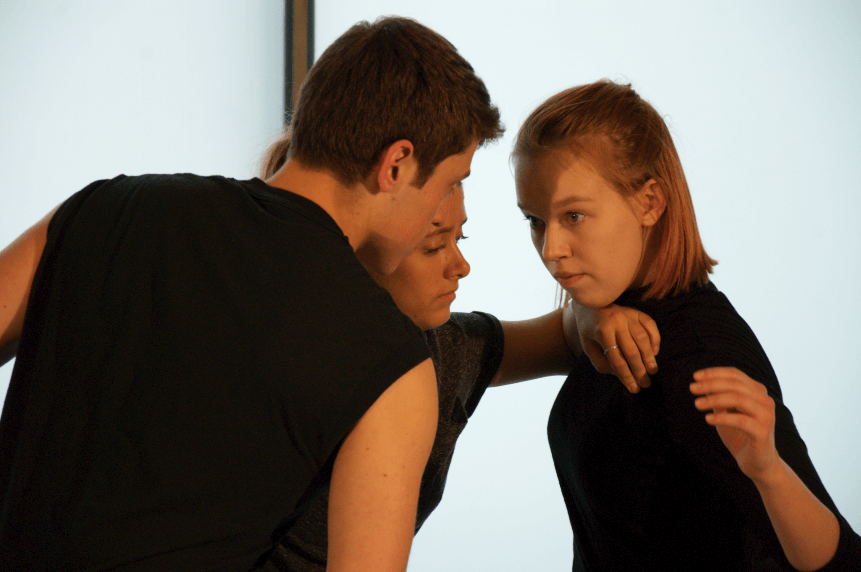 It seems based on the above experiment that an ‘act’ which is both intentional and performative carries the double-meaning of ‘dramatic’ and ‘non-referential’. Is the body known only through its gendered appearance? How could that differ in the context of gender representation? Gender is instituted through the stylisation of the body and hence must be understood as the mundane way in which bodily gestures, movements, and enactments of various kinds constitute the illusion of an abiding gendered self to show that what is called gender identity is a performative accomplishment compelled by social sanction and taboo (Butler 1988, 520). For instance, the work Factum Tremblay (2010) by Candice Breitz is a series of in-depth video portraits of male and female twins that extends the artist’s ongoing interest in doubling, portraiture and identity. The study of these twins addresses the very simple gestures in our everyday life, which are gendered and not authentic. (Factum Tremblay – Breitz 2009) 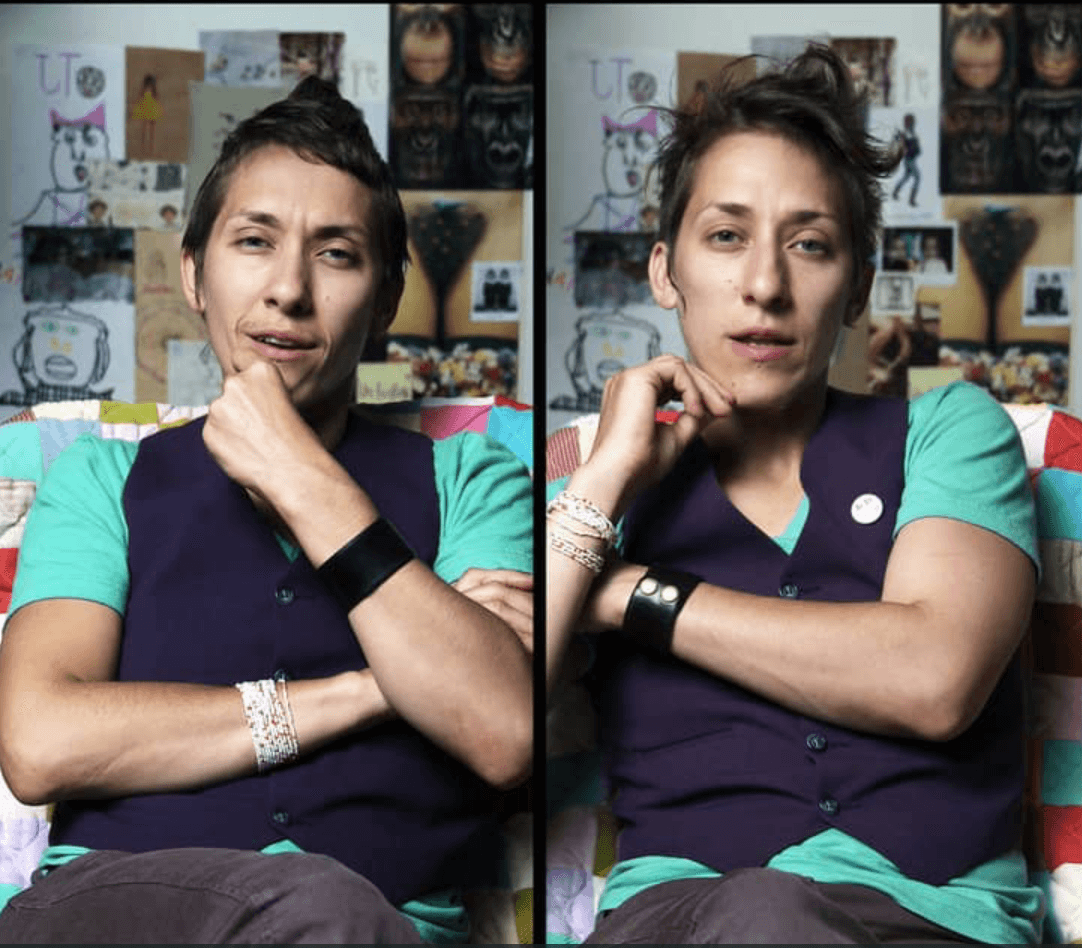 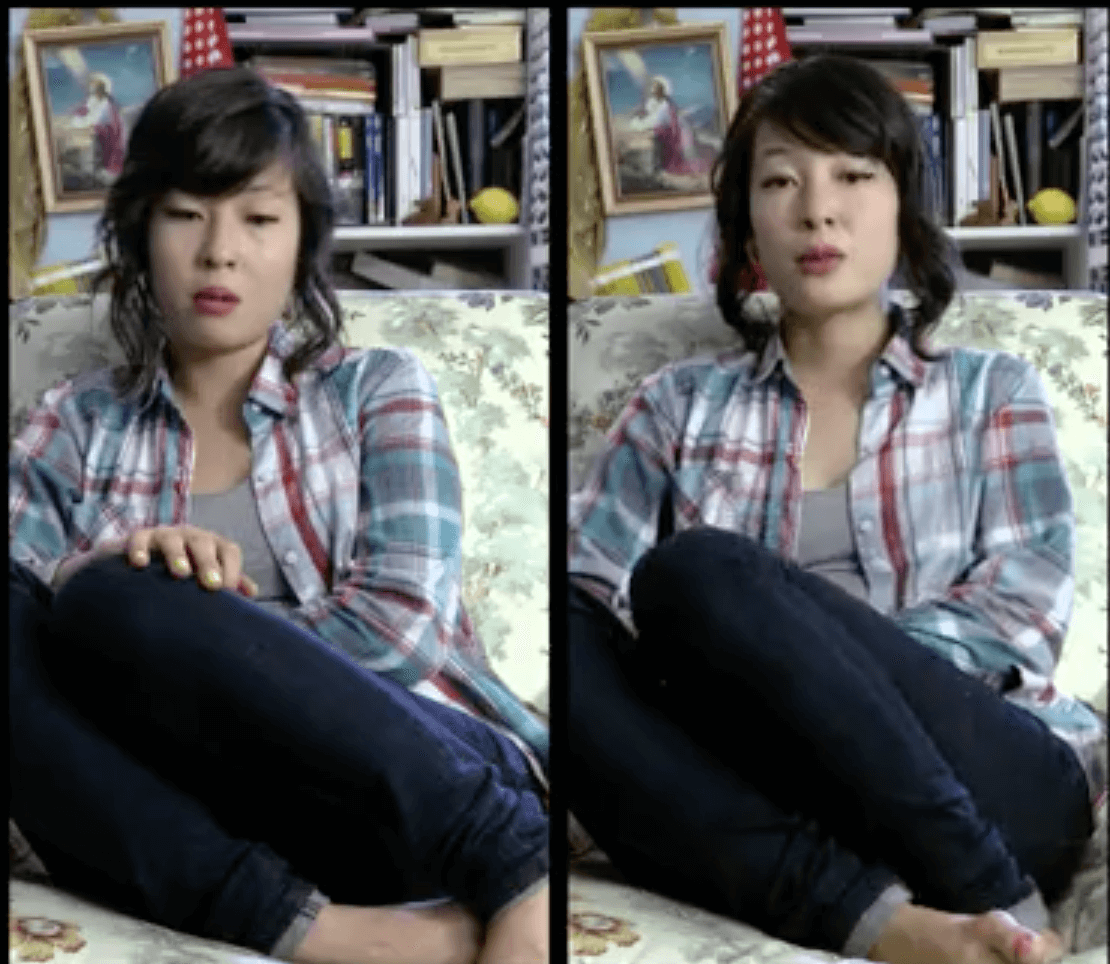 As anthropologist Victor Turner suggests in his studies of ritual social drama, social action requires a performance which is repeated. This ‘action’ is immediately rendered public. (Turner 1974) In this sense, gender is in no way a stable identity or locus of agency from which various acts emanate; rather, it is an identity tenuously constituted in time – an identity instituted through a stylised repetition of acts.

Dr Azadeh Fatehrad is an artist and curator based at the Kingston University London. Her research, artistic and curatorial practice are intertwined around a process of gathering information and generating new imagery in response to archival material she discovers. Fatehrad is co-founder of Herstoriographies: The Feminist Media Archive Research Network in London. Her recent book publication is titled Women’s Lives in Post-Revolutionary Iran: Photography, Desire and Resistance (2017). Fatehrad is the recipient of St John’s College Artist in Residence 2018.